Welcome to Coral. It used to be a vacation hotspot on the edges of claimed space, renowned for its seas, animals, and breathtaking typhoon season. Then, five standard cycles back, the civil war reached them. Now Coral is alone, and it was never meant to be. You're a wave chaser, one of the brave souls willing to go out into the world and see what's there.

The world is almost all water, and vessels to travel in are rare. To get around, you'll need to swim.

Coral was never meant to be self sufficient. Swim to salvage and scavenge what you can, and get creative with the local and terraformed resources.

The whole world is out there waiting for you to swim it. Explore fallen starships, resort settlements, strange research stations, and try to confirm the rumours that an ancient civilization once ruled the world of waves.

Wave Chasers is a rules lite RPG written for the Swimming Jam. It's a total of 20 pages long (with cover), and lays out the bones of the game and the planet Coral. Buying this game nets you a booklet, character map, and hazard map, all for $7.99! Future updates include an expanded v3 edition of the booklet, and a world map!

The core pdf is compatible with TTS reading software, and was tested with the @Voice app for Android.

In order to download this game you must purchase it at or above the minimum price of $7.99 USD. You will get access to the following files:

Support this game at or above a special price point to receive something exclusive.

Times are hard all over right now, so community copies of Wave Chasers are available. If you can't afford the title, grab a copy here, and enjoy your adventures on Coral! Swim - Survive - Explore! 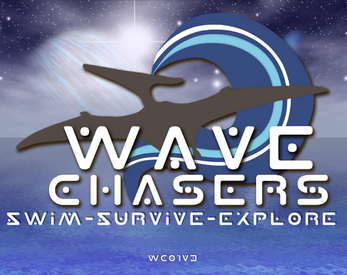